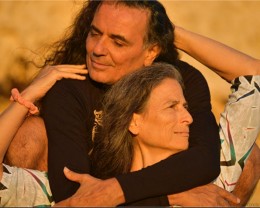 Ana Forrest is an inspiration and has been changing people’s lives for over 45 years. She is an internationally-recognized pioneer in yoga and emotional healing. She is the Creatrix of Forrest Yoga, a mystic, visionary, philanthropist, author, and Medicine Woman. Ana crafted Forrest Yoga while working through healing from her own life’s traumas - abuse, addictions, and the ongoing suffering from chronic injuries and illnesses. The process of healing herself inspired her to teach others how to heal themselves physi​cally, emotionally, mentally, and spiritually. Forrest Yoga is a powerfully physical, internally focused practice that emphasizes how to ​integrate the transformative experiences from the mat into purposeful daily life.

Ana took her first yoga class at age 14 and became a certified instructor in 1975. Ana used yoga and Native American ceremony to save her own life. It is her intent to pass that lifesaving ability forward. Her study and clinical application of healing modalities is vast, and includes homeopathy, naturopathy, anatomy, reflexology, acupressure, craniosacral treatments, regression therapy, reiki, polarity, hands on healing and Ceremony. All these inform her work and lead to her becoming a wise, intuitive teacher & healer. In her life-long love for evolving,

Ana has journeyed into Indigenous Sacred ceremonies, like Sweat Lodge, Pipe Ceremony, Vision Quest, and Sundance. Ana has now taught and toured in over 33 countries.
Ana is at heart a woman of the wilderness. She has spent many years in the mountains and forests learning from the animals, trees, rocks, water, and the seasons. Prior to becoming a yoga teacher, Ana spent her early years training horses, dogs, cats, birds, and the occasional snake. It was a natural progression to move to teaching humans.
“I’m proud & honored to work with the US military.” Ana has worked with fighter pilots, ground crew, soldiers, and the Explosive Ordinance Disposal (“bomb squad”), at the US base in Lakenheath, England. In the US, she has taught war veterans in VA hospitals in Florida and Washington DC. She has received a medal of gratitude for her work with the wounded warriors of the Warrior Transition Battalion, and a medal of excellence for her work with veterans in Fort Carson, Colorado. Ana is a consultant to the United States Air Force 48th Fighter Wing, as well as to the Exalted Warrior Foundation.

Ana is the recipient of a Los Angeles Mayoral Commendation recognising her outstanding teaching and healing work in the community, the first time a major U.S. city bestowed such an honor on a yogi or yogini.

Jose Calarco is Ana’s co-director of Forrest Yoga. Jose comes from a long history of shamanism, the arts, music and healing, bringing his decades of experience as an artistic prodigy to Forrest Yoga. Jose is also Director of the legendary Australian Indigenous company Descendance Aboriginal and Torres Strait Islander Dance Theatre www.descendance.com.au. Descendance won the UNESCO (United Nations) competition as the world’s best Indigenous live show in a field of over 70 countries in Seoul Korea 2004.

Jose’s Ceremonies acknowledge the custodians of the land & build a bridge to the Spirit World, calling on the ancestors to participate. Jose creates ceremonies based upon his lifetime of experiences, innovatively weaving creation stories, poetry & music into the yoga practice.

Jose brings his passion, playfulness and heartfelt respect for the ceremonial traditions of the First Peoples to every Forrest Yoga event. A musician, singer and songwriter, Jose uses the language of music to convey messages of the spirit for which there are no words.

Jose’s music invites students to attune to the cosmic vibrations all around us, which helps us realize that we are the vibration: Jose’s music is an invitation into the feeling of coming home.
Jose’s experience as a faith healer and Medicine Man spans over 30 years. He has collaborated with many Indigenous wisdom keepers like Medicine Woman and Aboriginal cultural treasure, Kathy Marika, of the Yirrkala People of East Arnhem shire Northern Territory, and he co-created Descendance Aboriginal with Indigenous elder and Song Woman, Imelda Willis, of the Yidinji and Kandju tribes of far Northern Australia. Imelda is Jose’s Spiritual Mother; she adopted him in order to share the knowledge & plight of the Aboriginal people to the world. Jose’s extensive travels with Descendance to over 40 countries have guided him to participate in a multitude of Indigenous ceremonies from a vast array of different cultures from around the world

Ana and Jose have a saying “Authenticity in Spirituality can be gauged by our conduct in everyday life”. With their dedication to global healing, the couple co-creates a magical and safe arena for transformation. To learn from Ana & Jose means to dive into a transformational treasure chest. They continue to teach throughout the year around the world. Discover the sacred potency of “JoseAna’s” life’s work at a Forrest Yoga event.

Receive inspiration on home practice in your inbox

Sign up for our newsletters and get our FREE E-book "Practicing Yoga at Home: The Ultimate Guide".