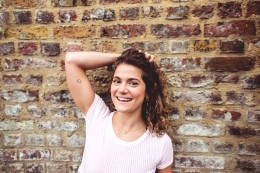 As a physics graduate and trained actress, making the transition to full time yoga teacher wasn't the obvious choice. However, it was after discovering a strong yang style of yoga in London, and then traveling to India to explore the lighter practice of Sivananda yoga that she realised what an integral part of her physical and mental wellbeing it had become. She then returned to India a year later to complete her 200hr Yoga Teacher Training in Ashtanga and Ashtanga Vinyasa (Rocket) with The Yoga People, who themselves were taught by Larry Schultz the pioneer of Rocket yoga. Katarina immediately began teaching yoga full time and by 2017 had completed 500hrs of advanced Teacher Training with her teachers Jamie and Dulce, The Yoga People, in Ashtanga, Rocket, Yin & Mandala Vinyasa. Katarina continues to build her advanced teacher training hours as expanding her knowledge, to pass on to her students is something she’s very passionate about. She has completed 50hrs of advanced adjusting and anatomy with Ambra Vallo and 50hrs of Progressive Ashtanga Vinyasa with David Kyle and completed her Pregnancy Yoga training with Uma Dinsmore-Tuli.
Katarina's public teaching schedule consists of a mixture of Rocket yoga and the Mandala model in her Vinyasa classes, working closely with chakra and elemental theories.
In summer 2018 Katarina began co-teaching the 200hr Yoga Teacher Training with The Yoga People.
Join Katarina at a studio in London or on one of her yoga retreats worldwide. Katarina is the co-owner of Kindred Yoga, a yoga studio in Deptford Southeast London, with her husband Julian.
Katarina is a 500hr, Yoga Alliance approved, Registered Yoga Teacher. E-RYT 500.

Katarina in the blog