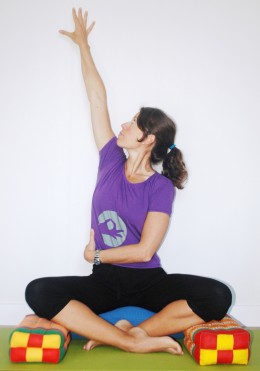 Barbara specialises in yoga for people affected by cancer and has been working with physiotherapists and carers to provide support to chair and bed bound students. Barbara believes that yoga is a precious tool to support cancer patients through the physical and emotional challenges of cancer treatment and recovery. She trained with Laura Kupperman at Yogacampus and is now a mentor on Laura’s Yoga for Survivors’ course.

Barbara approached yoga in 1995 thanks to the beautifully simple sequences developed by Gabriella Cella Al-Chamali and obtained a British School of Yoga Diploma in 2005. She enriched and deepened her practice at the Sivananda Yoga Vedanta Dhanwantari Ashram in Kerala, India, and more recently has approached a variety of styles including Jivamukti, Anusara and restorative yoga. She has been supported and encouraged by exceptional teachers and mentors including Frances Heelan in London and Vito Accettura in Milan. Barbara runs private and group classes in North London, including classes for visually impaired clients.